↓ Skip to Main Content
Home › VBA Beginners › Variable, Datatype and the Scope of Variable in VBA

Variable, Datatype and the Scope of Variable in VBA 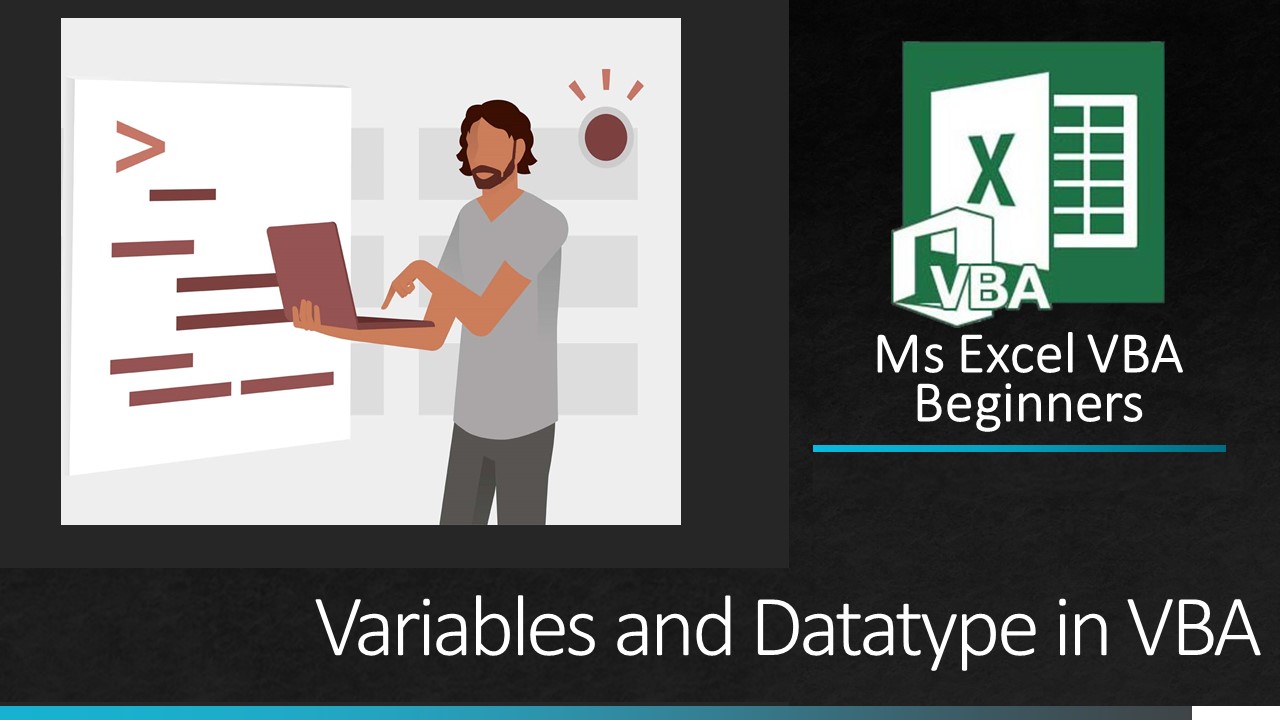 A variable name can be defined by the programmer and also can use to store value within the program. VBA properly manages the place in the computer’s memory which is used to store any value.

The variable in any Programming language can hold any kind of data but we have to tell compiler or interpreter to that which type of data variable can hold.

So at the time of declaration, we have to define its data type also

Variable and Datatype in VBA Video in Hindi

There are mainly two states of any variable

Declaration of Variable means we are telling to program is that we need a specified variable. Generally Variable is declared at the top of the program rather than in between program because it is a nice practice or it is a convention. But it is compulsory to declare a variable before to use.

There are three keywords and one word, use to declare any variable.

2. Initialization of Variable or assign value to variable

Important rules Keep in mind in VBA for Variable names

Length of the variable name is Maximum 255 character

Fist letter must be an alphabet.

Cannot use space between the name

Cannot use any symbol except underscore “_”

Cannot use VBA reserved keywords as a variable name.

Within a single program or procedure, all variable names must be unique.

Datatype defines which type of data Variable will be going to hold.

Assigning a value to string type variable with “ ” (double inverted comma). Any string Value must be between  “ ”.

Assigning a value to Date type variable with # (hash pound sign). Any Date and time Value must be between  # #.

In VBA default it is not compulsory to declare variable user can use the variable directly but sometimes it may create some problem so it is best practice to set up VBA like that so it compulsory tell to declaration variable. If you write the “Option Explicit” statement at the top of the program then VBA forcefully tells us to declare all the variables before use.

Another option is to set up the “Option Explicit” statement default writes at top of the all program automatically. Below is the step.

Step:3: “Options” Dialog box open. Click on the Editor tab then select the option “Require Variable Declaration” and then press the OK button.

Scope of Variable means which part of our program can access or use the declared variable. For example variable which is declared within the Sub Procedure or in the Function is only use within that outside it is not accessible.

Two things are important for the variable, which is “lifetime” and “Visibility” of variables. A variable’s lifetime means how long it will exist to use? And visibility means in which part of the program we can access it.

There are mainly three types of Variable Scope in VBA

The visibility of variables depends on where it is declared. If variable declared within the Procedure then it can only accessible within that procedure.

The visibility of variables or variables can use to the entire module for more than one procedure or function.  If variable declared at the top of the module, outside of all Procedure then it can accessible by more one procedure within the same module.

Application-level variables can be used at any module. It means such variables are available at the whole application. This type of variable also calls public variable. In below example, we declare variable “n1” as public in Module1 and it also used at Module2.